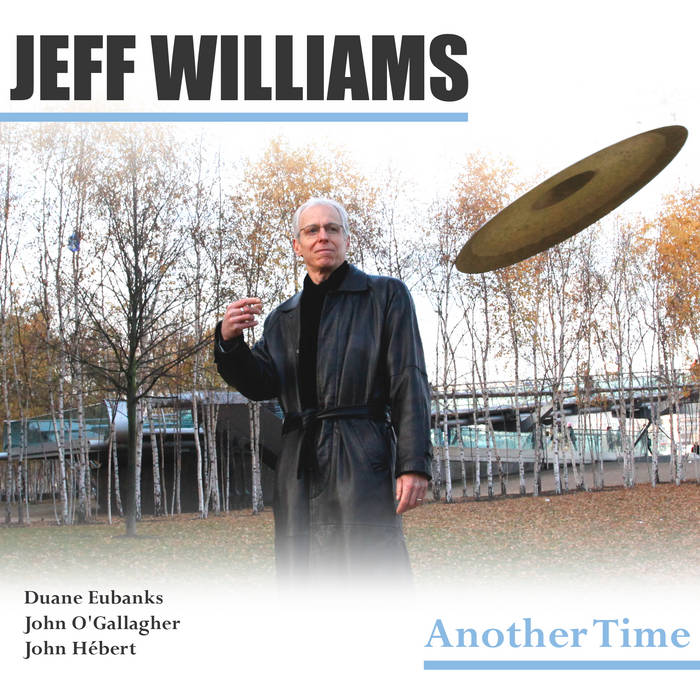 June 2011 marked the forty-year anniversary of Jeff Williams’ arrival in New York and the beginning of his professional career. Fresh from the Berklee College of Music, where he had studied with Alan Dawson, Jeff soon became immersed in the city’s burgeoning loft scene, playing informal sessions with Randy and Michael Brecker, John Abercrombie, Ralph Towner, Marc Copland, Jan Hammer and other up-and-coming musicians of the era. One such occasion included Dave Holland, who was working with Stan Getz at the time. Dave’s recommendation provided Jeff’s first break in the form of steady employment with the Getz Quartet from 1972-74.

Coinciding with and following Getz, Jeff partnered with Dave Liebman to form the group Lookout Farm. From 1973-76 the band toured internationally, recorded albums for ECM and A&M, and was awarded Downbeat’s 'Talent Deserving of Wider Recognition'. (Fast forward: Lookout Farm’s February 2010 reunion at Birdland was among All About Jazz NY’s 'Concerts of the Year'). In the intervening years Jeff has had lengthy associations with Lee Konitz and Joe Lovano, while also playing with everyone from Dizzy Gillespie and Paul Bley to Bill McHenry and Ethan Iverson. Jeff’s debut as a composer produced two albums with his 1991-95 quintet that included Kevin Hays and Tim Ries. The latter, Jazzblues (Cathexis), received a ★★★★ Downbeat review that included the encouraging comments, “The music is fresh and of today… Let’s hear more.”

So why wait so long to release another album? “The nineties group had a band sound and sensibility that I haven’t found again until now,” Jeff explains. “While we didn’t get to perform as often as I would have liked back then (Jeff was touring with Joe Lovano at the time), I could write with the individual personalities in mind, which is what’s happening again. The other reason is that there is no scarcity of music. You need to have something to offer that adds to what’s out there, an inimitable take on things. It happens when there is a distinctive chemistry. When you find that, it’s time to record.”

In Duane Eubanks (trumpet), John O’Gallagher (alto saxophone) and John Hébert (bass), each a bandleader in his own right, Jeff has found a combination that has inspired new compositions and spirited performances in New York jazz clubs over the last two years, prompting Small’s Mitch Borden to declare after a rousing set there, “You’re breaking new ground.”

“It’s not my intention to try to play something 'new' for newness sake”, replies Jeff. “In a sense it’s new because you’re playing it—no one else can be you. Your personality comes through in how you work with the elements of music, what choices you make. I want to reach people directly, engage them intellectually and emotionally, leave them with a lingering passage and a lasting feeling.”

Another Time does not forsake the group’s adventurous nature. One of the title’s multiple connotations alludes to rhythm and pulse. Ranging from the swing of 'She Can’t Be A Spy' to the loose interpretation of 9/8 in 'Fez', there is a wide breadth of rhythmic variation, ranging from the fundamental to the multi-metered. Strong melodies are in the forefront, evident also in the contributions of a composition each by the other band members. “I wanted all of us to be represented. Duane Eubanks has a special beauty in his playing that is also there in his writing, a vulnerable quality that goes right to the heart. John O’ Gallagher has an exhilaratingly personal language and virtuosity that distinguishes his compositions and improvisations. And John Hébert, among the most favored of contemporary bassists, reliably supplies just the right ingredient at the precise moment of need. I had played with each musician in other contexts, but putting them together ranks as one of my better moves. Every performance is a revelation.”

Another Time also expresses the period that began in the middle of the last decade, following Jeff’s marriage to long-time UK resident and celebrated American novelist Lionel Shriver, of 'We Need To Talk About Kevin' fame. With a second home in London, Jeff’s activities have multiplied to include UK projects involving Kenny Wheeler, Norma Winstone, Martin Speake, Bobo Stinson, Bill Frisell and numerous others. The straddling of two counties continues, while Another Time’s primary emphasis articulates Jeff’s current imperative of making time for the band heard here, and now.

"Their “chordless” approach liberates the harmony and creates a very open-textured group sound. O’Gallagher in particular impresses with his sinuous, Konitz-like lines, and Williams’s experienced hands pull it all together without ever seeming to impose anything as vulgar as a steady pulse."
★★★★ The Irish Times

"The interaction between Williams and these musicians produced a sound that is second to none...Another Time spotlights the brilliancy of Jeff Williams."
★★★★★ The Birmingham Times

"Jeff Williams is one of the great jazz drummers working today... [Another Time] is quite adventurous and interactive...I know this CD was a long time coming and I look forward to hearing more from this gem of a band."
The Jazz Truth

"Veteran drummer Jeff Williams, a charter member of the early ‘70s band Lookout Farm, fronts a formidable quartet on this highly interactive outing, his third as a leader, the stirring title track offers further evidence of Williams’ growth as a composer."
Jazz Times

"Jeff Williams has honed a sound that seamlessly blends a sinewy, propulsive rhythmic sense with a masterful appreciation of space and atmosphere. On 'Another Time' Williams leads a remarkable group."
New York City Jazz Record

"While Another Time is another clear indicator of Williams' drumming talents, it also serves as a fine display of his skills as a composer."
All About Jazz

"A most accomplished cd... [Williams] is the master percussionist who leads the way... excellent ensemble work."
Bebop Spoken Here

"A high degree of group interaction with Williams subtly dictating proceedings from the drums. With a strong balance between composition and improvisation the album absorbs and impresses throughout."
★★★★ The Jazz Mann

"[Another TIme] separates the man from the manqué when it comes to digging real left field jazz that has something to say and knows how to make it’s point."
Midwest Record

"[Another Time] is a subtle treat, restrained and tasteful, but surprisingly compulsive and revealing fresh felicities on each new exposure to its eight originals."
London Jazz

"[Williams] has waited for the right moment, preferring not to record until he had found a band that struck him as having the kind of unique chemistry and individuality that would stand out from the crowd... Excitingly raw."
JazzWise