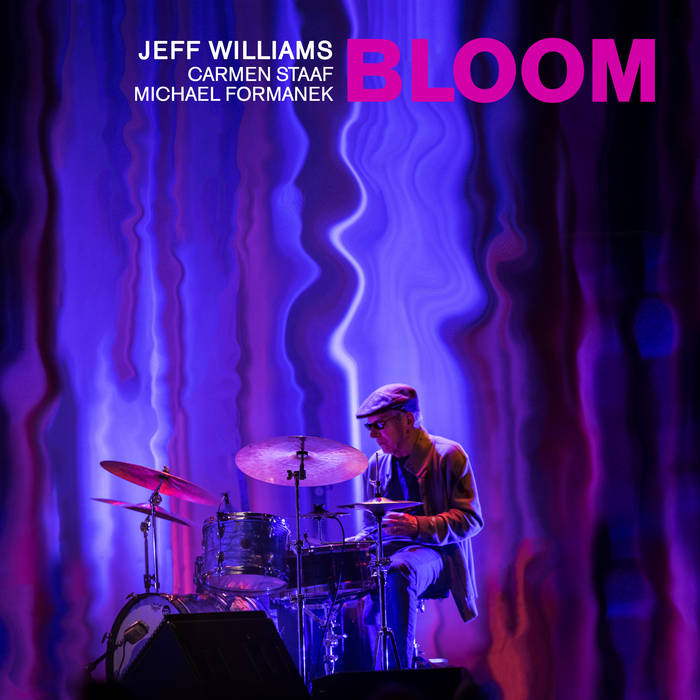 It speaks volumes when the bustling opening track of drummer Jeff Williams’ new piano trio release, Bloom, is revealed as “just us warming up, getting our headphone mix together”! For that’s the remarkable, spontaneous quality which his partnership with pianist Carmen Staaf and double bassist Michael Formanek delivers across ten numbers individually penned by each, plus a Buster Williams interpretation.

Jeff Williams has worked alongside Stan Getz, Dave Liebman, Joe Lovano, and John Abercrombie, in addition to leading his own groups for some time; and for the last few years, in the States, he has played in saxophonist Dan Blake’s quartet with pianist Leo Genovese and bassist Dmitry Ishenko. “One time when Leo was unavailable, Carmen stepped in, and I felt a real connection with her playing”, recalls the drummer. “We talked about the idea of a trio, after which I ran into Michael (we first met in the 1970s, gigging together in New York). That was the eureka moment – it bloomed outta nowhere, hence the album title.”

Including new piano trio arrangements of earlier numbers, Jeff jests that he shares Thelonious Monk’s attitude (when the great piano man was asked why he plays the same tunes all the time) that “I want people to hear them!” The harmonic beauty of ‘Another Time’, for instance – originally recorded with two horns and bass – is enhanced, thanks to Staaf’s invention and the colourful refractions of Williams’ cymbals (including a1950s K Zildjan ride); and the furtive, chromatic, 7/8 propulsion of ‘Scrunge’ segues into impatiently-grooving ‘Search Me’.

Staaf’s ‘Short Tune’ and ‘New York Landing’ reflect her bright personality – syncopated, picturesque and carefree with, as the drummer enthuses, “a certain quirkiness I like, plus a lot of technique in reserve – and there are few young musicians I know who can play the blues like that.” Williams, too, hails Michael Formanek’s ruminative ‘Ballad of the Weak’: “To me, that’s Strayhorn, Duke Ellington, Mingus – all of that quality”; and fast-swinging ‘A Word Edgewise’ features typically vibrant bass soloing.

‘She Can’t Be a Spy’ (a New York Times requote: ‘She can’t be a spy – look what she did with the hydrangeas’) impetuously strains at the leash, with no specific chord changes – “a fun challenge, taking it to the edge of the cliff”; and Buster Williams’ ‘Air Dancing’ (from charts passed to Jeff by the man himself) continues the tender sophistication passed down by the likes of Herbie Hancock and Wayne Shorter. Breezy ‘Northwest’ was recorded with Frank Kimbrough some years ago, and Staaf’s gamelan-like ‘Chant’ provides a meditative, droplet-piano, arco-bass conclusion.

“I grew up listening to many piano trios, especially Ahmad Jamal’s from around 1958–1962 – so that influenced my playing. But there’s no fixed concept, and this was simply a case of ‘Let’s see what we can do with it’. I’ve always played with people who inspire me, enjoying the conversation, going into some depth; and often thinking about the musicians, rather than the instrumentation. So I hope Bloom will allow us to flourish in pursuing this trio further.”

"To instantly discern the true cohesiveness of this trio, just listen to Formanek's sprightly 'A Word Edgewise' or the gracefulness imbued in Staaf's bluesy 'New York Landing'."
★★★★ All About Jazz

"An astonishing trio album... Almost still in bebop, amazingly open and with a firm focus on improvisation."
Jazz 'n' More

"The interplay of this trio is truly telepathic and further enhances the very clear structures of the original repertoire, both literally and figuratively."
Jazz News

“Chant’ represents a zen like oasis of calm…the overall effect is hauntingly beautiful.”
★★★★ The Jazz Mann

"The album is brightened by balanced moments and communicative openness."
JazzTrail

“Williams has built a truly crafty cohort to carry out his mission of nurturing spontaneity.”
Jazz Times

“This is a class album by class musicians.”
Bebop Spoken Here

“Robust, highly virtuosic playing, and there’s a sense of freedom and fun to the proceedings... Consistently engaging.”
Jazz Views

“Bloom is a chance to listen to a drummer who leads through the propulsive streams of ideas.”
Part Time Audiophile

“Jeff Williams's album "Bloom" is the sound of good plans coming together.”
NPR