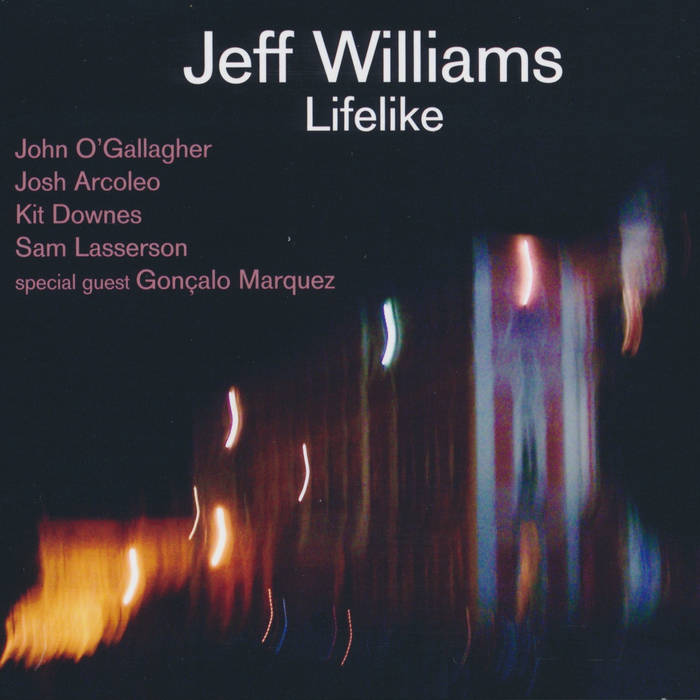 Dividing his time between Brooklyn and London, veteran drummer Jeff Williams is in the midst of an exceptional run on the Whirlwind Recordings label. Outlier, in 2016, showcased his working UK quintet in a set hailed by All About Jazz for its “imaginative compositions and excellent musicianship.” Lifelike, the follow-up, finds Williams and the group live on the bandstand, with a tweak in personnel and an expansion to sextet with the addition of guest trumpeter Gonçalo Marquez. Also entering the picture is alto saxophonist John O’Gallagher, a fiery presence on Williams’ first two Whirlwind releases (Another Time and The Listener). Tenor saxophonist Josh Arcoleo, pianist Kit Downes and bassist Sam Lasserson remain on board from Outlier, playing with characteristic beauty and grit.

Williams has documented his compositional voice on recordings going back to the late ’80s. His pedigree as a sought-after sideman and collaborator stretches back farther, from his membership in Lookout Farm with Dave Liebman and Richie Beirach to his vital work with Stan Getz, Lee Konitz, Ted Curson, Cecil McBee, Jerry Bergonzi, Joe Lovano and a host of others. Leading this new lineup, Williams builds on this extensive and invaluable history, pushing his art ever forward. “Lifelike is another way of saying ‘live,’” he muses about the album title. “The word is usually ascribed to inanimate objects and I always found it humorous. Basically, I felt that this recording has ‘life’ in it, the kind of life embodied in a live performance.”

Although Phil Robson, the brilliant guitarist on Outlier, recently moved to New York, O’Gallagher’s transition from Brooklyn to Birmingham, England came just in time. The change keeps the music fresh and unexpected. “John and I go back more than 20 years,” Williams says. “He’s been the constant in my band and it’s hard to imagine him not a part of it. He has his own musical vocabulary and conception, and fortunately he’s pursuing his doctorate from Royal Birmingham Conservatoire, where I also teach, so he’s available to me again as a key ingredient.”

Together, O’Gallagher and Arcoleo bring Williams’ music into tight focus while fostering a loose and supple interplay. Marquez joins on 'Under the Radar', 'Dream Visitor' and his own original 'Canção do Amolador', thickening the texture and harmony. “I was fortunate to meet Josh when he signed up for lessons with me at the Royal Academy of Music,” Williams recalls. “He studied with Pee Wee Ellis growing up, even toured with him while still a teenager. Gonçalo is a more recent discovery: I met him when bassist Demian Cabaud invited me to play some dates in Portugal last year. We played Gonçalo’s ‘Canção do Amolador’ and I was captivated. There’s a special hookup between trumpet and drums unlike any other. But it has to be just right, and it is with him.”

Downes is a formidable soloist throughout, but the color and dynamic sensitivity of his comping proves just as extraordinary. “Kit is an exceptional musician with incredible ears,” Williams says. “He’s able to anticipate and enhance everything the band members play. And Sam, one of London’s most in-demand bassists, has logged numerous musical miles with me over the last decade or so. With him I’m able to play exactly as I feel.”

Williams, for his part, is a tremendous presence on the kit, tailoring the dynamics of the pieces, swinging hard and responsively, harnessing the energy and uncompromising musical intelligence of his colleagues. Lifelike may capture just one night (June 13, 2017) in one club, but it’s a vibrant summation of the band’s achievement across many live performances in support of Outlier.

“My own compositions come from different periods,” Williams says. “‘Borderline’ and ‘Lament’ are from the ’90s, others quite recent. All are conceived at the piano: sometimes I just write down the notes as they present themselves, or sometimes I’ll play one for an extended period while learning to improvise on the form and tweaking the harmony, as was the case with ‘The Interloper.’ I’m looking for balance between songs with structure and open forms so that the players have freedom to express their own conception.”

A number of the tunes Williams recorded on earlier releases; Lifelike offers an intimate view of their evolution during many nights on the bandstand. 'Borderline' and 'Lament' from The Listener, and 'Under the Radar and 'Double Life' from Another Time, were all previously heard in a chordless quartet context, with O’Gallagher and trumpeter Duane Eubanks. The contrast here after the addition of Downes’ piano and Arcoleo’s tenor is striking. ('Under the Radar' is a six-bar blues, Williams observes). Of 'The Interloper' and 'Borderline', Williams says: “These have in common a Monkian sensibility, though it wasn’t intentional. In both cases the melody dictated the form, making the structures unusual and challenging to maintain for soloing.”

'Dream Visitor', with its tension-filled repeating bass motif, cleverly shifts key centers throughout to “allow each soloist to have a different tonality to explore,” Williams explains. “The final section features a different, more funk-like bass line. In this version, a group blowing section culminates in the spontaneous horn figure you hear just before the conclusion. The overall trajectory is mapped out, but that horn figure just happened.”

The rubato section of 'Lament', Williams notes, “is almost like a fugue. It was written after a good friend passed away in a tragic accident. He was from New Orleans and the beginning is like the funeral service, while the swing section is like the second line that celebrates the deceased.” And 'Double Life', with its shifts from bright waltz to midtempo and double-time 4/4, “refers to my trans-Atlantic existence, as well as the second life that I gave the tune by reworking it.” In these and the other pieces, there’s technical brilliance but also a deeper emotional frame of reference, giving Lifelike a most complex and magnetic appeal.

​"​The writing is free-ranging, with lots of exploration at the edges of free-form, but the melodies and structures are satisfyingly memorable and direct throughout​."
Jazz Views​

“Williams constantly pushes at the shift between tonality and atonality and deftly masters the balance between structured and open play.”
★★★★​ ​Concerto Magazine

"The entire band cooks up a storm or just as easily eases off the gas allowing for more subtle restraint, displaying incredible talent in the process."
Sea of Tranquillity

“Elements of bop, post-bop, avant-garde meet, and the past and the present merge into a natural overall experience, full of vitality.”
Musik an sich

"The sextet plays cohesively and pleasantly, no one pushes to the foreground, but allows 'band music' in its true sense to emerge."
Westzeit

“The interaction of the musicians produce a cohesive whole.”
Der Hörspiegel