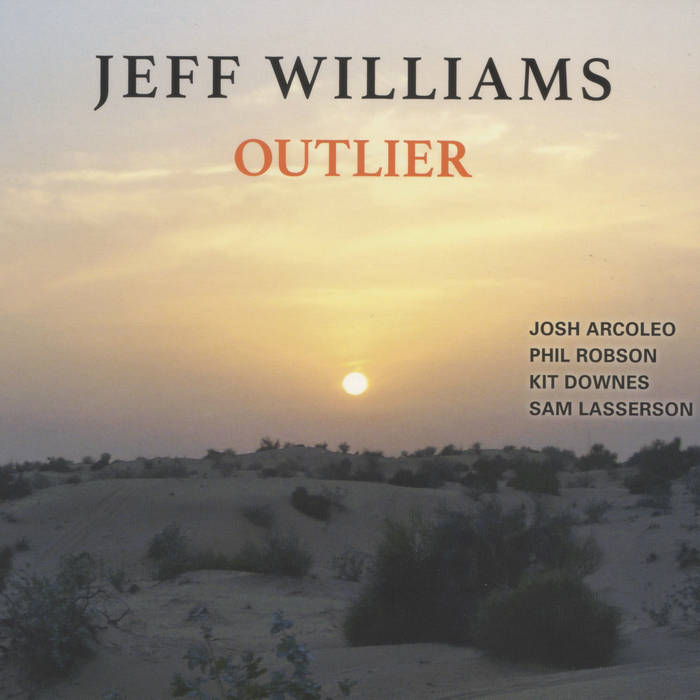 Williams has graced innumerable New York and London stages over the years, making frequent Atlantic crossings between the two cities. In his latest solo project, the accomplished band leader and composer collaborates with both seasoned and up-and-coming colleagues from the UK: Josh Arcoleo (tenor saxophone), Phil Robson (guitar), Kit Downes (keys) and Sam Lasserson (basses). This engaging album of originals prompts a dynamic quintet response to a variety of energized compositions.

His third album for Whirlwind (following 2011’s Another Time and 2013’s The Listener), Williams’ Outlier combines previously unrecorded works from the ‘70s and ‘80s – such as the driving, fusion-laced ‘Dream Visitor’ and Brazilian-hued ‘Hermeto’ (after Hermeto Pascoal) – with more recent, equally assertive compositions. As an experienced leader at the kit with an instinctive, deeply-imbued jazz sensibility, Williams coaxes intelligent, colorful interplay from his colleagues. As Jeff confirms: “It always astonishes me what these guys – leaders in their own right – bring to the music that I write. They find things I didn’t even know existed.”

The scope of this imaginative working band ranges from the smouldering, Joe Henderson-influenced oscillations of the title track ‘Outlier’ to the relentless ‘Oddity,’ which swings with unbridled vitality. The straight forward beauty of ‘New and Old’ recalls poignant memories with tender detail. Also a pianist, adding Rhodes to this album, Williams describes ‘Meeting a Stranger’ as “one of those rare tunes that came out whole”. Possessing a wide brashness, ‘The Interloper’ exudes a joyful, Monkish abandon.

Like all masters of a genre, Jeff Williams has profoundly internalized the traditions of jazz without being tyrannized by its conventions. Combining his influences and broad experience to form his own unique voice, he refuses to constrain himself to a single stylistic approach. Most vitally, he wants his audience to respond to his music emotionally: “It’s my continued vision – my aim to offer something that’s universal but also personal, and which might transport the listener into a realm that’s pleasurable and thought-provoking. It’s important to me that, within the construction of the music, there’s a feeling and a warmth to be discovered.”

An adventure in Anglo-American jazz partnership, Outlier brings out the best in stellar players from both sides of the pond.

"[Williams] brings together elements of music he’s experienced through an impressive career to make new compositions that inspire his cohorts."
London Jazz

"A very good album which benefits from Williams' imaginative compositions and the ensemble's excellent musicianship... play frequently for a lasting effect."
All About Jazz

"The pieces are robustly appealing and the improv – from a crack British band including pianist Kit Downes, guitarist Phil Robson and tenor saxist Josh Arcoleo – is even better."
The Guardian

"At this point in jazz’s evolution... what’s important is that players make strong music together, and this fine group certainly do."
London Jazz

"Outlier has a classy, lived-in feel that never glosses over this band's tough, restless spirit in performance."
Jazzwise Magazine

"The recording does full justice to Williams’ distinctive cymbal work."
The Jazz Breakfast

"At times energised at others gentle, but engaging​."​
Sandy Brown Jazz

"A top-flight selection of cutting-edge UK players and a selection of exciting original compositions."
Jazz Views

"Powerful, energetic and unsettling jazz with a lot of warmth and soul at its core."
Jazz Podium

"A top notch British band plays superbly throughout with Williams' intelligent but approachable compositions giving them plenty to get their teeth into."
★★★★ The Jazz Mann

“Harmonious interactions between the new and the experienced… An album of remarkable versatility.”
Musikreviews Magazine

"A showcase for William’ skills as a composer and bandleader… An album that delivers new impressions with each listen.”
Der Hörspiegel